Repair of the north bridge of the notebook

Repair of the north bridge of the notebook 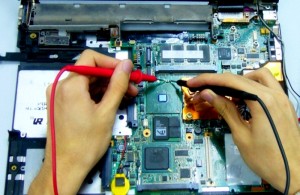 The North Bridge is a square BGA chip that makes up the chipset of the motherboard of the laptop, which is responsible for launching the processor, RAM, the video adapter. The north bridge is soldered at the top of the motherboard, at the location it was called. The breakdown of the north bridge is a serious inconvenience for the laptop owner, since the device is not suitable for use. The cost of replacing the north bridge of the laptop in the workshop is quite high, but it is cheaper to replace the damaged part than to acquire new equipment for work.

The cause of the failure of the north bridge is often its overheating. Overheating is caused by:

Such reasons cause a breakdown not only of the north bridge, but also of the VGA chip and the processor.

Symptoms of a malfunction

The owner of the laptop can guess about the failure of the north bridge on the following grounds:

The final conclusion about the cause of the breakdown is given by a qualified service center technician, since similar signs also appear in case of a failure of the south bridge, video chip or processor. When the receiver confirms a malfunction, the repair price of the north bridge of the laptop is announced and its repair or replacement is carried out.

Where to fix it?

Many users believe that they can just buy a new chip and repair a broken laptop with their own hands. But soldering BGA chips is made only on special equipment and has its own nuances, so this type of repair is carried out in a specialized workshop.

Our service center offers users the service of repairing the north bridge of the laptop in Minsk. Service masters will professionally replace the chip, and if the part is working, but the contact between the chip and the board is broken due to the soldering of the soldering, they will do a reballing of the chip and prolong the life of the existing part.