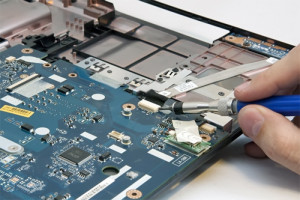 The motherboard is the main part of the notebook that connects the chips, controllers and connectors that are necessary for the laptop to perform its functions. This is the link that combines the individual electronic components into a single device. The outage of the motherboard is a huge trouble for the owner of the device.

There are many causes that lead to malfunctioning details. They will depend on the price of repairing the laptop motherboard. The main causes of breakdowns include:

Mechanical damage to the board is more likely to occur due to users’ fault, due to external factors, overheating and power failure occur. Poor assembly and use of substandard parts entirely on the conscience of developers. If the board is damaged, notebook owners prefer to restore the broken part, since the cost of repairing the laptop’s motherboard is lower than the cost of replacing it.

There are several manifestations of the breakdown of the motherboard:

Sometimes, to solve the problem, it is enough to clean the cooling system and check the power supply, but serious repairs are usually required.

Where to fix the motherboard?

Diagnostics of breakage, as well as repair of the motherboard of HP notebooks, Asus, Acer, Samsung and others should be performed in the workshop by specialists, since similar signs occur when other details – a video card, matrix, processor, are broken – and only a professional can understand the true reason. Attempts of inexperienced users to repair a laptop with their own hands using video from the Internet lead to serious problems.

The replacement of the motherboard on the laptop in Minsk is possible in our service center. Masters of service will make diagnostics, repair the damaged board as soon as possible and return the laptop to working condition.